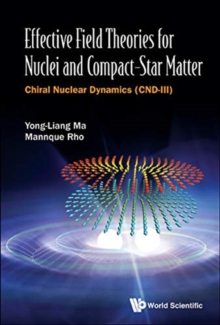 Effective field theories have been widely used in nuclear physics.

This volume is devoted to exploring the intricate structure of compact-star matter inaccessible directly from QCD.

It is principally anchored on hidden symmetries and topology presumed to be encoded in QCD.

It differs from standard effective field theory and energy density functional approaches in that it exploits renormalization-group flow in the complex 'vacuum' sliding with density inferred from topology change identified as a manifestation of baryon-quark continuity in dense matter.

It makes a variety of predictions that drastically differ from the conventional treatments that could be tested by upcoming terrestrial and astrophysical experiments.This monograph recounts how to go, in one unique field theoretic formalism in terms of hadronic degrees of freedom, from finite nuclei to dense compact-star matter that could be explored in RIB-type machines in nuclear physics as well as in LIGO-type gravity waves in astrophysics.