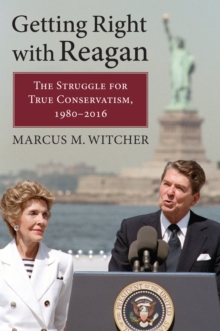 Getting Right with Reagan : The Struggle for True Conservatism, 1980-2016 Hardback

Republicans today often ask, "What would Reagan do?" The short answer: probably not what they think.

Hero of modern-day conservatives, Ronald Reagan was not even conservative enough for some of his most ardent supporters in his own time-and today his practical, often bipartisan approach to politics and policy would likely be deemed apostasy.

To try to get a clearer picture of what the real Reagan legacy is, in this book Marcus M.

Witcher details conservatives' frequently tense relationship with Ronald Reagan in the 1980s and explores how they created the latter-day Reagan myth. Witcher reminds us that during Reagan's time in office, conservative critics complained that he had failed to bring about the promised Reagan Revolution-and in 1988 many Republican hopefuls ran well to the right of his policies.

Notable among the dissonant acts of his administration: Reagan raised taxes when necessary, passed comprehensive immigration reform, signed a bill that saved Social Security, and worked with adversaries at home and abroad to govern effectively.

Even his signature accomplishment-invoked by "Mr. Gorbachev, tear down this wall!"-was highly unpopular with the Conservative Caucus, as evidenced in their newspaper ads comparing the president to Neville Chamberlain: "Appeasement is as Unwise in 1988 as in 1938."Reagan's presidential library and museum positioned him above partisan politics, emphasizing his administration's role in bringing about economic recovery and negotiating an end to the Cold War.

How this legacy, as Reagan himself envisioned it, became the more grandiose version fashioned by Republicans after the 1980s tells us much about the late twentieth-century transformation of the GOP-and, as Witcher's work so deftly shows, the conservative movement as we know it now.