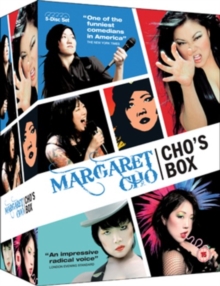 Collection of five stand up performances from the American comedian Margaret Cho.

Born into a Korean family in San Francisco, Cho began touring as a stand up at the age of 16.

In 'Beautiful' Cho puts forth her philosophy on beauty and laments its lack among the politicians and marketers who define so much of modern culture. 'Assassin' sees her taking aim at George W. Bush's presidency and the American religious right. 'I'm the One That I Want' finds Cho in her home city of San Francisco, reflecting humorously on her life to date.

In 'Notorious C.H.O.' Cho takes a look at modern issues of sexuality and minority rights.

Finally, in 'Revolution' she tackles subjects as diverse as the War on Terror and her ex-boyfriend.