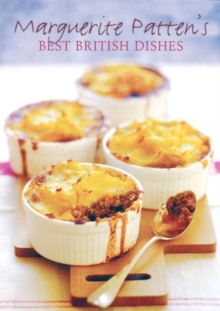 Marguerite Patten is one of Britain's best known and best loved cookery writers.

She is the author of over 170 books and numerous newspaper and magazine articles.

Her "Cookery in Colour" was first published in 1960 and with sales of over 2 million copies has broken all records in cookery book publishing.

Here she turns her attention to one of her real true passions - the classic cookery of the British Isles.

From traditional breakfasts, to high teas, from roasts to hearty soups she has selected a collection of over 400 of her favourite recipes showing the enormous and exciting variety of British produce and cooking.

Marguerite Patten's career spans more than half a century and began before World War II working for the Ministry of Food. She had a weekly television programme in the early days of broadcasting in the late 1940s and throughout the 1950s.

Since then she has lectured, given countless thousands of demonstrations and written articles and cookery cards and many, many successful books.

She celebrated her 90th birthday in 2005 but still works full-time and lives in Brighton.