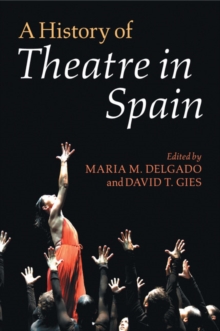 A History of Theatre in Spain Paperback / softback

Leading theatre historians and practitioners map a theatrical history that moves from the religious tropes of medieval Iberia to the postmodern practices of twenty-first-century Spain.

Considering work across the different languages of Spain, from vernacular Latin to Catalan, Galician and Basque, this history engages with the work of actors and directors, designers and publishers, agents and impresarios, and architects and ensembles, in indicating the ways in which theatre has both commented on and intervened in the major debates and issues of the day.

Chapters consider paratheatrical activities and popular performance, such as the comedia de magia and flamenco, alongside the works of Spain's major dramatists, from Lope de Vega to Federico Garcia Lorca.