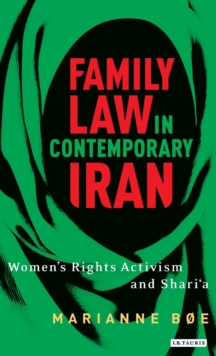 Passed into law over a decade before the Revolution, the Family Protection Law quickly drew the ire of the conservative clergy and the Ayatollah Khomeini in 1979.

In fact, it was one of the first laws to be rescinded following the revolution.

The law was hardly a surprising target, however, since women's status in Iran was then - and continues now to be - a central concern of Iranian political leaders, media commentators, and international observers alike.

Taking up the issue of women's status in a modern context, Marianne Boe offers a nuanced view of how women's rights activists assert their rights within an Islamic context by weaving together religious and historical texts and narratives.

Through Her substantial fieldwork and novel analysis, Boe undermines both the traditional view of 'Islamic Feminism' as monolithic and clears a path to a new understanding of the role of women's rights activists in shaping and synthesizing debates on the shari'a, women's rights and family law.

As such, this book is essential for anyone studying family law and the role of women in contemporary Iran.