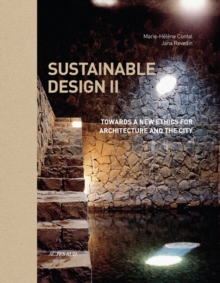 Sustainable Design II : Towards a New Ethics for Architecture and the City Hardback

In 2007, architect and academic Jana Revedin created the Global Award for Sustainable Architecture, in partnership with the Cite de l'Architecture et du Patrimoine in Paris and a network of architecture centres and international universities (cIVA, IUAV, IABL and MFA).

The prize, which received the patronage of UNESCO in 2011, is awarded each year to five architects who share the ethic of sustainable development and who have taken an innovative approach, whether in built-up urban environments or in informal settlements.

With laureates coming from South and North America, central Europe, Scandinavia and Israel, the 2011 generation confirms the growing importance of the issues surrounding community-based construction and the globalisation of the debate on the links between architecture, the natural world and development.

This publication illustrates the work of the 2009-2010 laureates (Sami Rintala, Studio Mumbai, Diebedo Francis Kere, Patrick Bouchain and Loic Julienne, Thomas Herzog, Junya Ishigami, Steve Bear, Giancarlo Mazzanti, Troppo Architects and Snohetta.) The first part of every chapter presents the architects, setting out their philosophy, expIaining the approach that they have each adopted within the society in which they live and highlighting the specific experience that each brings to the global debate.

The second part presents two or three projects that illustrate this approach particularly well and that carry important lessons.