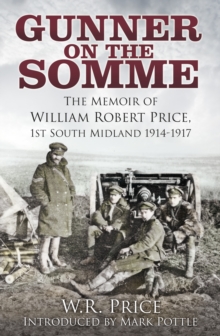 Gunner of the Somme is a remarkable memoir detailing the life of a gunner on the Western Front as observed by a gentleman scientist who served in the ranks. William Price was a Cambridge botanist who worked at Kew Gardens but a speech impediment made him feel unable to serve as an officer.

He enrolled in the ranks and left this incredible description of how the brigade operated, how men worked on the guns and his experiences as a gunner. His account runs from the outbreak of war until he was wounded in late 1917, and there is a moving postscript written in 1958 when he returned to the battlefields around Ypres.

In addition to his descriptions of the fighting at the Somme and Passchendaele, he includes fine detail - such as food and swearing in the ranks - that is hard to find elsewhere.