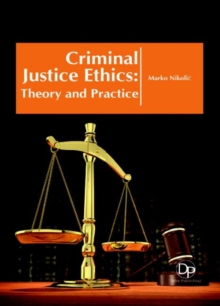 Ethics give us system of moral principles. Many people tend to equate ethics with their feelings.

But being ethical is clearly not a matter of following one's feelings.

Being ethical is also not the same as following the law.

Law is often opposite to what is ethical, as history showed us many times.

Ethics refers to well-founded standards of right and wrong.

Ethics is important for all participants in the legal system and for those who struggle for justice.

Immoral person cannot apply the law because that person essentially does not understand it.

But it is not so easy, great wisdom and objectivity is required so one would be able to say that he is an ethical and moral judge, even harder is when we are talking about whole legal system(s).

In the beginning we will start from the foundation, and get acquainted with the most important ethical systems, from the Greek Virtue ethics to the modern Feminist ethics and Egoism on the other hand.

Connection of Ethics and religion is also very important, and researcher needs to understand it well before entering the world of philosophy and moral.

First next step is understanding the Natural law and Social Contract Theory and then we can start revealing the complex world of ethical and moral dilemmas.

In Chapter 2. we will ask the question of what you will do when being endangered or hurt.

Do you blame or do you forgive? Where to draw the line between vengeance and forgiveness, the two opposite worlds.

We will try the ethic "outsider" viewpoint in Chapter 3.

The ability to take this attitude will make many hidden facts obvious.

We may in the future be able to predict the crime risk and stop growing victimization rates.

Chapter 4. is here for us to stop and think for a while. Is enabling weapons to citizens and making it available while being concerned with crime rates ethical move of legal authorities?

Community-oriented policing strategies and new approaches to ensure public safety are always welcome in aspiration to make moral society driven by moral principles. Because of this we are dealing with new approaches for the police but also considering for new rules and codes of ethics in Chapters 5-8.

Are existing rules universal and sufficient? Culture of honor might be responsible for higher crime rates.

Chapters 9 and 10 will be dealing with this theme. How is this correlating to what we know about crime and ethics so far?

In any case, ethical norms must be seen on both sides of the bars.

Of course we did not forget the third party involved in the process beside police and inmates- legal scientist.

We will read more about the ethical side of their work in Chapters 11 and 12.

We will separately address the greatest moral affliction of every system itself- systematic corruption.

Corruption exists in every society, and under every system, incurable, but we must strive to find out which factors executes any influence on it.

Whether a person would be harder to give in to corruption in a richer society?

More religious? In that with stricter laws? Or commonly accepted state rules in the population? Chapter 14. shed some light on one more controversial subject. Although many will think that false confessions are happening only in movies, this is much more often phenomena.

At least some percentage of these are people who are choosing to go to jail because of some moral reason, some personal ethic.

Chapter 15 is not getting much easier, it deals with morality and drug abuse.

While Chapter 16 will show that earlier discussed corruption is present in reach and poor parts of the world equally, only the forms are sometime different. Because inner principles are obviously not enough, or so it seems at the present, many countries are resorting to the real observer: body cameras worn by police officers.

We will finish with 3 Chapters about importance of understanding between police and communities and the most obvious examples of unethical behavior of police officers: police brutality and racially biased behavior.

I hope that among the readers there will be future police officers who will always have moral laws on their mind as much as the written rules.