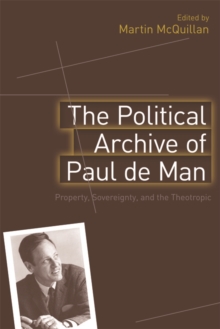 The Political Archive of Paul de Man : Property, Sovereignty and the Theotropic Hardback

This book re-reads a major theorist in terms of the current crisis in sovereignty and global capital.

In this book, 13 experts revisit de Man's account of Rousseau and what he calls a 'Theotropic Allegory' (the second to last step before 'Political Allegory', on the road toward a general theory of Textual Allegory).

They frame de Man's readings of Rousseau in a 'post-theoretical' landscape concerned with political theology, occupied with the transformation of the western model of sovereignty, and faced with the apparent collapse of the capitalist global contract.

The volume is framed by an introduction by leading de Man scholar, Martin McQuillan, and concludes with an original and previously unpublished text by Paul de Man.

It presents the first published responses to a recently published de Man manuscript.

It features an outstanding list of contributors. It includes an original unpublished text by Paul de Man on Nietzsche.