Part of the Doctor Who - The Eighth Doctor series

The Time War is the legendary combat between the Time Lords and their arch enemies the Daleks, an event so huge, so terrible, that only a fragment could be released on television.

These audio adventures bring the epic scale of the conflict to life as the two races battle and the universe burns in the crossfire! In this release, the Eighth Doctor and Bliss are dragged into The Time War as the Daleks replenish their army, using Davros himself. 4.1 and 4.2 Palindrome by John Dorney. In an alternative universe, Davros lives in peace, until the Doctor and Bliss arrive, and the Daleks emerge in a new reality. 4.3 Dreadshade by Lisa McMullin.The Time Lords, including the General and the Twelve, adjust to life after the Time War, untilthe Doctor and Bliss return with a warning. 4.4 Restoration of the Daleks by Matt Fitton. The Dalek Time Strategist restores the Dalek armies to the universe, but wants to dispense with Davros.

Also in the Doctor Who - The Eighth Doctor series 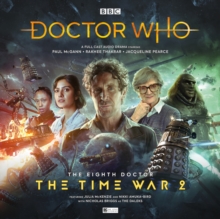