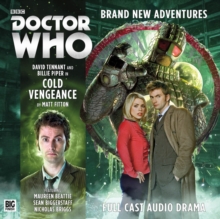 Part of the Doctor Who - The Tenth Doctor Adventures: Cold Vengeance series

The TARDIS arrives on Coldstar, a vast freezer satellite, packed with supplies to feed a colony world.

But there are cracks in the ice, and something scuttles under the floors.

Soon, Rose and the Doctor encounter robots, space pirates and... refuse collectors. As Coldstar's tunnels begin to melt, an even greater threat stirs within.

An old enemy of the Doctor puts a plan into action - a plan for retribution.

Nobody's vengeance is colder than an Ice Warrior's. David Tennant's return to the role of the hugely popular Tenth Doctor has been huge news both times it's happened for Big Finish - with news of his teaming up with Billie Piper making newspapers when it was announced.

Billie Piper, famed British actor of stage and screen, and companion Rose Tyler, reprises the role for the first time since her departure in the tear-jerking Journey's End Doctor Who story on BBC1. Guest star Nicholas Briggs here provides the voices of iconic Doctor Who foe the Ice Warriors - a duty he's performed on TV too (as well as for the Daleks, Cybermen, and other creatures).