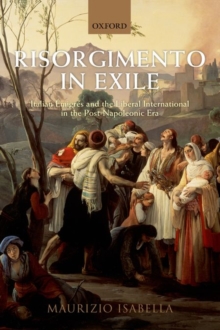 Risorgimento in Exile : Italian Emigres and the Liberal International in the Post-Napoleonic Era Paperback / softback

The experience of exiles was fundamental for shaping Italian national identity.

Risorgimento in Exile investigates the contribution to Italian nationalism made by the numerous patriots who were forced to live in exile following failed revolutions in the Italian states. Examining the writings of such exiles, Maurizio Isabella challenges recent historiography regarding the lack of genuine liberal culture in the Risorgimento.

He argues that these emigres' involvement in debates with British, continental, and American intellectuals points to the emergence of Liberalism and Romanticism as international ideologies shared by a community of patriots that stretched from Europe to Latin America.

Risorgimento in Exile represents the first effort to place Italian patriotism in a broad international framework, revealing the importance and originality of the Italian contribution to European Anglophilia and Philhellenism, and to transatlantic debates on federalism.

In doing so, it demonstrates that the Risorgimento first developed as a variation upon such global trends.