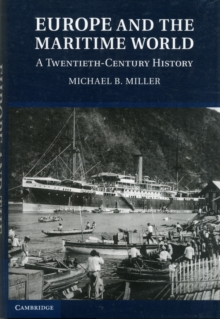 Europe and the Maritime World : A Twentieth Century History Hardback

by Michael B. (University of Miami) Miller

Europe and the Maritime World: A Twentieth-Century History offers a framework for understanding globalization over the past century.

Through a detailed analysis of ports, shipping and trading companies whose networks spanned the world, Michael B.

He argues that the combination of overseas connections and close ties to home ports contributed to globalization.

Miller also explains how the ability to manage merchant shipping's complex logistics was central to the outcome of both world wars.

He chronicles transformations in hierarchies, culture, identities and port city space, all of which produced a new and different maritime world by the end of the century.