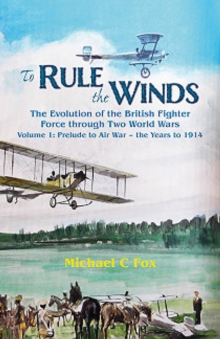 To Rule the Winds : The Evolution of the British Fighter Force Through Two World Wars Volume 1: Prelude to Air War - the Years to 1914 Hardback

To Rule the Winds is the story of how a co-ordinated force of the Royal Air Force's fighter squadrons came into being as Fighter Command in 1936 and what became of it after the Battle of Britain.

It is a large story, to be told in a series of volumes.

This first volume recounts the origins of military aviation in Britain, up to the beginning of the First World War in the August of 1914.

By the 18th and 19th centuries, balloons had been tried in various conflicts on the Continent of Europe, during Britain's involvements in the Napoleonic wars, the Crimea, South Africa and elsewhere, as well as during the American Civil War. The aeroplane flights in the USA by the Wright brothers from December 1903 changed the direction of military aviation.

It would not be until 1908 that similar flights would begin in Britain, some way behind flights by aeronauts in Europe and especially France that culminated, momentously, in Bleriot's crossing of the English Channel in 1909 that proved beyond doubt that Britain could be invaded by air.

Thereafter, although the British military authorities did not with alacrity embrace aeroplanes as weapons of war, at least a start was made that enabled a small force of miscellaneous and unarmed aeroplanes to take the Field with the British Army in 1914- a force that would evolve in the course of the Great War into the Royal Air Force.

The theme of the whole series is the evolution of a force of aeroplanes first adapted and later designed to fight in the air against other aeroplanes- the 'Scout' or 'Fighter'.

Covering a period in which the type did not really exist, this first volume explores the origins of that force: the Royal Aircraft Factory; the Air Battalion of the Royal Engineers; the Royal Flying Corps; disaffection with airships; early development of aeroplanes for war; problems with monoplanes; aerial gunnery and wireless experiments; the foundations of an Air Ministry; preparations for aerial defence. 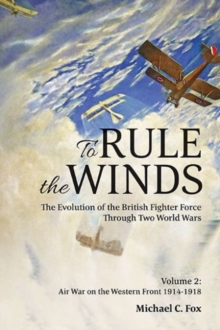 To Rule the Winds