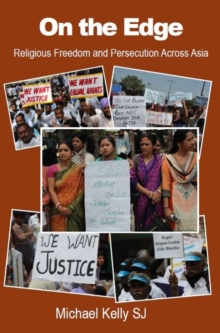 On the Edge Hardback

by Michael, DO Kelly

Asia as a continent accounts for half the world's population.

Within its boundaries, there is an incomparable diversity of cultures, socio-economic standards and political structures. And all the world's major religions-Hinduism, Islam, Judaism, Buddhism and Christianity-have their origins in Asia.

Little wonder that religion is always involved in the flash points that occur across the region. Religious freedom and religious persecution knows no boundaries and are alive and well in all their complexions from Korea in the north to Indonesia in the south, from the Philippines in the east to Pakistan in the west. And UCAN has reporters and analysts across Asia's full extent.

We have brought our unique network to the task of examining and the evaluating the prospects for religious freedom and the causes of religious persecution in Asia. As rational beings, we humans actualize our highest capacity when we make choices.

For that exercise we need freedom. At the heart of all freedoms-political, economic and cultural especially-is the freedom to believe.

Religious freedom is the fundamental freedom. Belief and its restriction attack the heart of freedom. But the circumstances and conditions of religious freedom and the persecution of believers vary greatly across the continent.

The range and reach of those circumstances and conditions across Asia are what this volume offers.