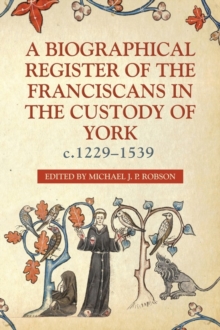 A Biographical Register of the Franciscans in the Custody of York, c.1229-1539 Hardback

The Franciscans, frequently known as Greyfriars, were inspired by the charismatic figure of Francis of Assisi (+1226).

Pledged to a life of penitence and evangelical poverty, they strove to bring Christianity to life through their example and preaching.

In the late summer of 1224 they reached England, where they quickly established a presence at Canterbury, London, Oxford and Northampton.

Attracting a large number of recruits from the universities, the regular and secular clergy and laymen, they spread rapidly throughout the country, establishing communities in the cities and principal boroughs.

The custody of York, with its friaries of Beverley, Boston, Doncaster, Grimsby, Lincoln, Scarborough and York, a regional cluster, began with the friars' arrival in the cathedral cities of Lincoln and York before 1230.

The custody reached from Whitby to Spalding. Although several monastic ruins adorn the landscape of northern Lincolnshire and much of Yorkshire, the seven friaries have left little visible trace, and there are few vestiges of the friars' once teeming archives and impressive libraries.

However, despite the dispersal of these documents, there are other sources which illuminate the friars' ministry and shine a spotlight upon an individual friar.

This biographical register of 1,704 friars draws upon a range of materials, including the wardrobe accounts, the episcopal registers, papal documents the probate registers, urban records, chronicles and diverse sources, illuminating their daily lives and activities, from studying the liberal arts and theology to celebrating Mass and hearing confessions.

While some friars are represented by a single entry, other lives are better chronicled, particularly those who were active in the universities, the service of the crown and the local community. MICHAEL ROBSON is a fellow of St Edmund's College, Cambridge.