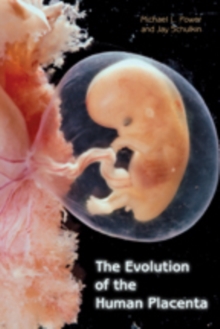 The Evolution of the Human Placenta Hardback

As the active interface of the most biologically intimate connection between two living organisms, a mother and her fetus, the placenta is crucial to human evolution and survival.

Michael L. Power and Jay Schulkin explore the more than 100 million years of evolution that led to the human placenta and, in so doing, they help unravel the mysteries of human life's first moments.

Starting with some of the earliest events that have influenced the path of placental evolution in mammals and progressing to the specifics of the human placenta, this book examines modern gestation within an evolutionary framework.

Human beings are a successful species and our numbers have increased dramatically since our earliest days on Earth.

However, human fetal development is fraught with poor outcomes for both the mother and fetus that appear to be, if not unique, far more common in humans than in other mammals.

High rates of early pregnancy loss, nausea and vomiting during pregnancy, preeclampsia and related maternal hypertension, and preterm birth are rare or absent in other mammals yet not unusual in humans. Power and Schulkin explain why this apparent contradiction exists and address such topics as how the placenta regulates and coordinates the metabolism, growth, and development of both mother and fetus, the placenta's role in protecting a fetus from the mother's immune system, and placental diseases.

In the process, they reveal the vital importance of this organ-which is composed mostly of fetal cells-for us as individuals and as a species.