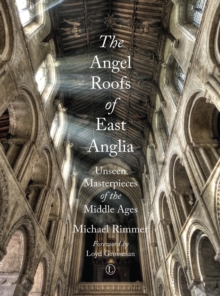 Shortlisted for the East Anglian Book Awards 2016! It has been estimated that over 90% of England's figurative medieval art was obliterated in the image destruction of the Reformation.

Medieval angel roofs, timber structures with spectacular and ornate carvings of angels, with a peculiar preponderance in East Anglia, were simply too difficult for Reformation iconoclasts to reach.

Though they are both masterpieces of sculpture and engineering, angel roofs have been almost completely neglected by academics and art historians, because they are inaccessible, fixed and challenging to photograph. 'The Angel Roofs of East Anglia' is the first detailed historical and photographic study of the region's many medieval angel roofs.

It shows the artistry and architecture of these inaccessible and little-studied medieval artworks in more detail and clarity than ever before, and explains how they were made, by whom, and why.

Michael Rimmer redresses the scholarly neglect and brings the beauty, craftsmanship and history of these astonishing medieval creations to the reader. The book also offers a fascinating new answer to the question of why angel roofs are so overwhelmingly an East Anglian phenomenon, but relatively rare elsewhere in the country.