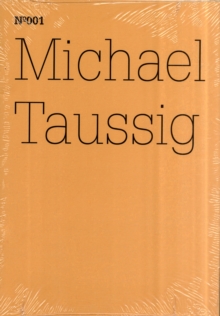 What is it that makes notebooks so fascinating? Anthropologist Michael Taussig, for whom fieldwork notebooks are an indispensable tool, discusses this very question.

A starting point of his investigation is Walter Benjamin, who obsessively filled his own notebooks and was intrigued by their materiality.

Roland Barthes, Le Corbusier, and Joan Didion are some of the many other notorious note takers that Taussig visits so as to crystallize his ideas of what a notebook really is.

Far more than a mere "thing," Taussig argues that a notebook develops a life of its own, a life, which is often fed by what hasn't been written down and other externalities. In the end, this history can even take possession of its possessor by transforming a notebook into a magical object, a fetish.Anthropologist Michael Taussig (*1940) is a professor at Columbia University, New York.