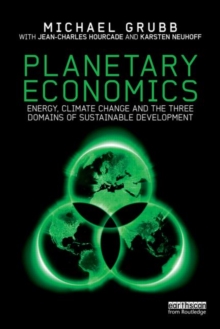 How well do our assumptions about the global challenges of energy, environment and economic development fit the facts?Energy prices have varied hugely between countries and over time, yet the share of national income spent on energy has remained surprisingly constant. The foundational theories of economic growth account for only about half the growth observed in practice. Despite escalating warnings for more than two decades about the planetary risks of rising greenhouse gas emissions, most governments have seemed powerless to change course. Planetary Economics shows the surprising links between these seemingly unconnected facts.

It argues that tackling the energy and environmental problems of the 21st Century requires three different domains of decision-making to be recognised and connected. Each domain involves different theoretical foundations, draws on different areas of evidence, and implies different policies. The book shows that the transformation of energy systems involves all three domains - and each is equally important.

From them flow three pillars of policy - three quite distinct kinds of actions that need to be taken, which rest on fundamentally different principles.

Any pillar on its own will fail. Only by understanding all three, and fitting them together, do we have any hope of changing course. And if we do, the oft-assumed conflict between economy and the environment dissolves - with potential for benefits to both.