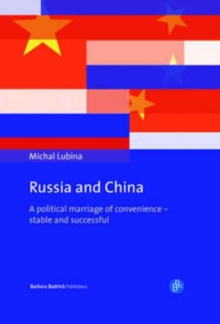 Russia and China : A political marriage of convenience - stable and successful Hardback

This book depicts the sophisticated relationship between Russia and China as a pragmatic one, a political "marriage of convenience".

Yet at the same time the relationship is stable, and will remain so.

After all, bilateral relations are usually based on pragmatic interests and the pursuit of these interests is the very essence of foreign policy. And, as often happens in life, the most long-lasting marriages are those based on convenience. The highly complex, complicated, ambiguous and yet, indeed, successful relationship between Russia and China throughout the past 25 years is difficult to grasp theoretically.

Russian and Chinese elites are hard-core realists in their foreign policies, and the neorealist school in international relations seems to be the most adequate one to research Sino-Russian relations.

Realistically, throughout this period China achieved a multidimensional advantage over Russia.

Yet, simultaneously Russia-China relations do not follow the patterns of power politics.

Beijing knows its limits and does not go into extremes.

Rather, China successfully seeks to build a longterm, stable relationship based on Chinese terms, where both sides gain, albeit China gains a little more.

Russia in this agenda does not necessary lose; just gains a little less out of this asymmetric deal.

Thus, a new model of bilateral relations emerges, which may be called - by paraphrasing the slogan of Chinese diplomacy - as "asymmetric win-win" formula.

This model is a kind of "back to the past" - a contemporary equivalent of the first model of Russia-China relations: the modus vivendi from the 17th century, achieved after the Nerchinsk treaty.