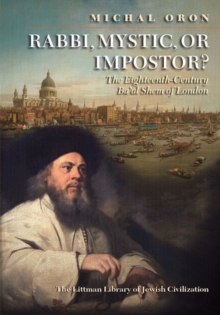 Part of the Littman Library of Jewish Civilization series

The enigmatic kabbalist Samuel Falk, known as the Ba'al Shem of London, has piqued the curiosity of scholars for enerations.

Eighteenth-century London was fascinated by Jews, and as a miracle-worker and adventurer, well connected and well read, Falk had much to offer.

Interest in the man was further aroused by rumours of his dealings with European aristocrats and other famous characters, as well as with scholars, Freemasons, and Shabbateans, but evidence was scanty.

Michal Oron has now brought together all the known source material on the man, and her detailed annotations of his diary and that of his assistant give us rich insights into his activities over several years.

We learn of his meetings and his travels; his finances; his disputes, his dreams, and his remedies; and lists of his books.

We see London's social life and commerce, its landed gentry and its prisons, and what people ate, wore, and possessed.

The burgeoning Jewish community of London and its religious practices, as well as its communal divisiveness, is depicted especially colourfully.

The scholarly introductions by Oron and by Todd Endelman and the informative appendices help contextualize the diaries and offer an intriguing glimpse of Jewish involvement in little-known aspects of London life at the threshold of the modern era.