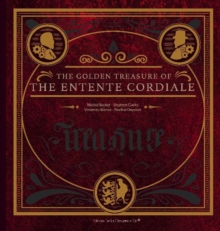 The Golden Treasure of the Entente Cordiale Hardback

The Golden Treasure of the Entente Cordiale is a treasure hunt book for the whole family.

It is also a history and celebration of the Entente Cordiale between Britain and France.

When Edward VII and French Prime Minister Emile Loubet signed the Entente Cordiale on 8 April 1904, the agreement was sealed with a golden casket.

Given to France by the UK, the casket was made by the prestigious Goldsmiths & Silversmiths Company, jewellers by appointment to the crown.

Inside the casket was a roll of parchment inscribed with a text celebrating Anglo-French friendship and, on the lid, a golden sculpture, the allegorical figure of Peace crowning France and Britain with laurels.

The Golden Treasure of the Entente Cordiale contains 9 puzzles created by Vincenzo Bianca.

Each puzzle is made up of an illustration by Michel Becker and secret text hidden in the accompanying story, The Tale of the Edrei, written by Pauline Deysson.

Each puzzle is written as a poem with some parts of the text missing.

To find the missing text, the player needs to crack the hidden code in the accompanying illustration.

Once the player has successfully solved all 9 puzzles, they will have to use the Treasure Map and the Adventurers Notebook (available from the website of the treasure hunt when it is launched) to find the exact spot where the geode crystals are located.

Each geode is hidden in a chest along with documentation clearly stating that it is one of the geodes of Entente Cordiale treasure hunt.

One piece of geode is hidden in the UK and the other in France.

The two pieces of geode need to be united to open the crystal cabinet containing the golden casket.

You could say it requires a new Entente Cordiale! Bestselling British author and historian Stephen Clarke has also written an irreverent and informative history of the Entente Cordiale for the book, revealing how it came about and how it reshaped Europe.

Editions De La Chouette dOr will be launching a website to tie into The Golden Treasure of the Entente Cordiale.

The site will host a forum for treasure hunters to post questions to the authors, as well as talk to each other and compare notes.