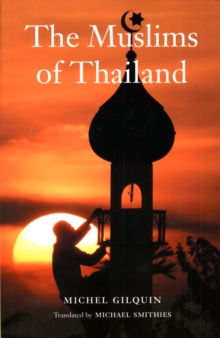 The Muslims of Thailand Paperback / softback

Thailand is usually closely associated with Buddhism, but since 1998 the country has been one of the observer members of the Islamic Conference Organization, and senior figures in the present and previous governments have been Muslim.

Some 8 percent of the population is Muslim, and in the three southernmost provinces of the country they constitute a majority.

Islam is ever more visible in Bangkok, where the demographic increase of Muslims is marked. Michel Gilquin, a sociologist specializing in the study of Muslim societies and a resident of Morocco, examines the origins of Islam in the kingdom of Siam, Muslim integration into the Thai nation, and the effects of globalization and modernity on a mostly traditional and rural community.

In particular he considers the weight of history of the old sultanate of Patani on the present-day Yawi-speaking majority in Narathiwat, Yala, and Pattani, and the circumstances leading to "the troubles" which erupted in 2004 and which, alas, continue. Without proposing any solutions, the book explains the background to the present impasse, and considers how far integration of the minority has been, and can be, successful.