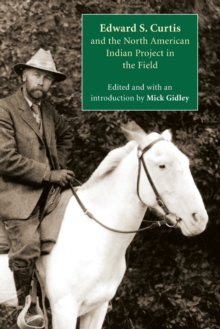 In Edward S. Curtis and the North American Indian Project in the Field, Mick Gidley provides an intimate and informative glimpse of Edward S.

Curtis (1868-1952) and his associates as they undertook their work in the early decades of the twentieth century.

Photographer Curtis embarked on an epic quest to document through word and picture the traditional cultures of Native Americans in the western United States-cultures that he believed were inevitably doomed.

Curtis's project became the largest anthropological enterprise undertaken in this country and yielded the monumental work The North American Indian (1907-30).

Its publication was a watershed in the anthropological study of Native Americans and inspired the first full-length documentary film, popular magazine articles, books for young readers, lectures, and photography exhibitions.

Housing a wealth of ethnographic information yet steeped in nostalgia and predicated upon the assumption that Native Americans were a "vanishing race," Curtis's work has been both influential and controversial, and its vision of Native Americans must still be reckoned with today.

Gidley draws on a wide array of unpublished or uncollected reminiscences, reports, letters, field notes, and magazine and newspaper articles.

The reports and reflections by Curtis and the project's ethnological assistants, memoirs by Curtis family members, and eyewitness accounts by newspaper reporters afford an unprecedented look at the process of anthropological fieldwork as it was commonly practiced during this period.

This book also sheds light on the views of Curtis and his contemporaries concerning their enterprise and the Native peoples they worked with and provides a clearer sense of how both Native Americans and the mainstream American public perceived their efforts.