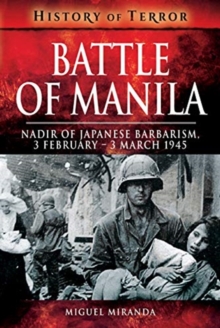 Part of the History of Terror series

The Philippine capital, surrounding an old Spanish fortress, was once a glittering jewel among America's overseas possessions. And now a vast Allied army led by the indomitable MacArthur is ready to take it back from the Japanese.

It is a necessary mission and an urgent one for trapped within the old University of Santo Tomas are thousands of ailing prisoners: men and women, young and old, at risk of torture and death by their captors. But the token Japanese garrison has other ideas as desperate units of the Japanese navy dig in to fight to the death against the advancing Americans.

Caught in this cruel vice are thousands of Filipinos still trapped in the metropolis, with no hope of escape.

From the closing days of January until early March 1945, Manila is to endure the most bitter fighting in the Pacific theatre, leaving it a charred wasteland littered with the bodies of the dead, soldier and civilian alike, the latter deliberately targeted by Japanese death squads.

Such is the carnage and conquest of Manila.