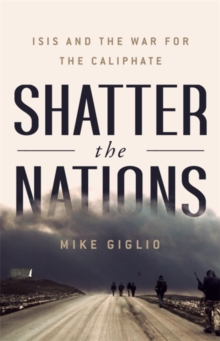 Shatter the Nations : ISIS and the War for the Caliphate Hardback

The war against ISIS and the so-called caliphate it declared across Syria and Iraq was a battle to define not just the Middle East but the wider world.

Growing from the aftermath of the U.S. war in Iraq and a brutal civil war in Syria, ISIS sought to usher in a new era of conflict as it launched terrorist attacks across Europe, while inflicting a savage extremism on the population in controlled. And the U.S. developed a new kind of war to stop it - one that that relied heavily on the sacrifices of local soldiers who fought on behalf of the American cause.

This struggle came to a climax in the Iraqi city of Mosul, the crown jewel of the caliphate, in the deadliest urban combat the world had seen in a generation.

Few journalists got as close to the war, and to protagonists on both sides of it, as Mike Giglio, who spent six years reporting on the rise and fall of the ISIS proto-state.

He travelled along the Turkey-Syria border with the smugglers and operatives who worked in ISIS's criminal and financial networks, accompanied antiquities traders to visit stolen artefacts that helped to fund the ISIS war effort, sat with human traffickers at the heart of the migrant crisis, and met with ISIS defectors as they tried to free their minds from its grip. He also embedded often with the local soldiers on the front lines of the international effort to stop ISIS, tracking a war effort that saw these soldiers take heavy casualties as U.S. special forces worked in the shadows and U.S. pilots and drone operators dropped bombs. In Mosul, the war's central battle, he travelled in the attacking convoys of elite Kurdish and Iraqi commandos as car bombs plunged into their ranks and ISIS drones dropped grenades.

Behind the drama on the battlefield, the suspense was in how much ISIS might change the world before its cities fell and how many of America's allies it could kill along the way.

The story is a chilling portrait of the destructive power of extremism and of the tenacity and astonishing courage required to defeat it.