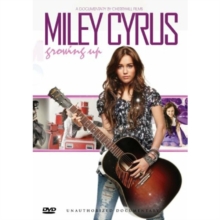 Documentary about the life and career of American actress and country pop singer Miley Cyrus.

She has since gone onto find worldwide success in both the music and film industries.