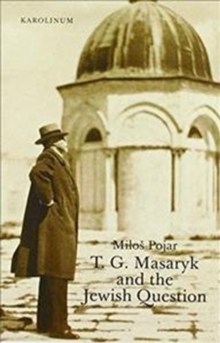 In this book, Milos Pojar traces the development and transformation of the opinions about Jews and Judaism of the first Czechoslovak president, T.

G. Masaryk. Pojar describes the key events and ideas that shaped Masaryk's attitudes: his first contacts with the Jewish world as a child, and later as a student; his work as a philosopher and sociologist, through which his thinking on Marxism, social issues, Christianity, and Judaism evolved; and his later, pivotal, experience at the time of the anti-Semitic libel trials against Leopold Hilsner, known as the Hilsner Affair.

Pojar also details the period when Masaryk, as president, formulated his position on matters such as the Czech-Jewish movement, the question of assimilation, and Zionism.

Featuring an entire chapter on Masaryk's celebrated 1927 trip to Palestine as well as a series of brief profiles of outstanding Jewish figures that explore both Masaryk's attitudes to their ideas and their opinions of Masaryk, this book is a compelling personal portrait and a substantial contribution to our understanding of the history of Jews in the Czech lands.