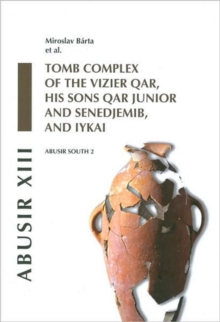 Part of the Excavations of the Czech Institute of Egyptology series

The current volume is the first of the three planned publications dedicated to the complex of the vizier Qar and his sons, dating to the Sixth Dynasty, reign of Teti - Pepy II.

It comprises a full record of the tombs of the vizier Qar, Qar Junior, Senedjemib and Tjenti accompanied by chapters on the geology and geophysical survey of Abusir South, faunal and floral remains from the tombs, and anthropological evaluation of the human remains.

The second volume will contain the full publication of the tomb complex of Inti with chapters on faunal remains, and restoration methods applied in individual tombs belonging to the family.

The final volume will be dedicated to numerous unique finds discovered during the works in the tombs. Their provenance cannot be assessed with certainty and they thus form a distinct group of evidence with much information about the cemetery's later development down to the First Intermediate Period. This tomb complex provided a vast array of archaeological evidence in terms of architecture, decoration and environmental evidence.

Out of the numerous unique features stand out the fully preserved and decorated cult chapel, the decorated burial chamber and large groups of finds from individual burial chambers, among them hundreds of copper implements.

The current publication illustrates the situation of the elite society members, belonging to a single family, in Memphis at the end of the Old Kingdom and shows typical features that led to the ultimate demise of the Old Kingdom state.