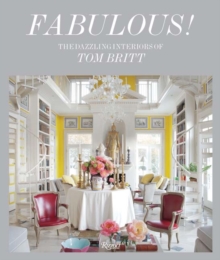 Ever since Tom Britt opened his New York based firm in 1964, he has been creating dramatic environments for his high-profile clients on multiple continents.

The resulting spaces are perfect for luxuriating and entertaining. From a chic pied-a-terre in San Francisco and tantalizing rooms at New York s famed Dakota apartment building to suburban manses in America s Midwest and a palace apartment in Jaipur, Britt s inimitable style merges saturated colours with an easy luxury.

This book is necessary reading for anyone interested in the modern masters of interior design. Tom Britt has been a presence in the interior design industry both nationally and worldwide for over fifty years.

A native of Kansas City, Missouri, he has been extensively featured in Architectural Digest and has appeared in many other domestic publications such as Elle Decor, House Beautiful, House and Garden, the New York Times, and W magazine.