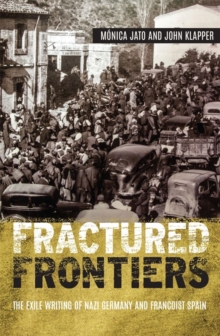 Writers opposed to National Socialism or Francoism have been considered either territorial exiles, who left their country, or "inner exiles," who did not.

Those who stayed were initially accorded greater status, while those who left were denigrated.

With time, however, there was a growing recognition of the hardship and achievements of territorial exiles and increasing criticism of inner exiles.

Later critical debates have perpetuated this fissure and failed to explore the similar origins and assumptions of the two forms of exile. This book adopts a unique cross-cultural approach, illuminating the shared roots of opposition across the two cultures and exilic settings.

It challenges the traditional divide, demonstrating striking similarities in terminology, exilic identities, and literary concerns, between not only "inner" and "outer" but also the German and Spanish contexts.

The study offers new perspectives on the literary historiography of twentieth-century Germany and Spain, showing how, in the impact and consequences of dictatorship, the histories of the two countries intersect.

It is thus of interest to literary historians and students of German and Spanish literature, and it also, because it provides English translations of all quotations, serves as an introduction for English-speaking readers to this poorly understood phenomenon and its implications for other exilic settings. Monica Jato is Reader and John Klapper is Emeritus Professor in the Department of Modern Languages, University of Birmingham, UK.