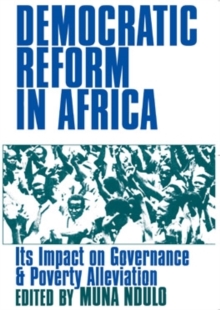 Democratic reform in Africa has been slow, difficult, and at times painful.

Nevertheless, sufficient time has passed for those interested in political and economic development to assess what progress, if any, Africa has made in addressing the need for the consolidation of democratic reform and the resolution of considerable developmental challenges.

Economic aid and other forms of financial assistance are progressively conditioned on good governance.

Accordingly, African states in the New Partnership for African Development (NEPAD) have devised standards for economic and political governance.

While the link between governance and development and poverty has been widely accepted, some key interrelationships between elements of the two sectors remain open to debate.

Democratic Reform in Africa highlights the issues that cut across both the political and economic reform spectra and identifies obstacles to democratic reform.

The book examines various institutions and their role in governance and poverty alleviation, and recognizes those who are involved in the process of both democratic reform and economic development.