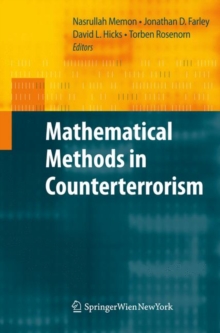 Terrorism is one of the serious threats to international peace and security that we face in this decade.

No nation can consider itself immune from the dangers it poses, and no society can remain disengaged from the efforts to combat it.

The termcounterterrorism refers to the techniques, strategies, and tactics used in the ?ght against terrorism.

Counterterrorism efforts involve many segments of so- ety, especially governmental agencies including the police, military, and intelligence agencies (both domestic and international).

The goal of counterterrorism efforts is to not only detect and prevent potential future acts but also to assist in the response to events that have already occurred.

A terrorist cell usually forms very quietly and then grows in a pattern - sp- ning international borders, oceans, and hemispheres.

Surprising to many, an eff- tive "weapon", just as quiet - mathematics - can serve as a powerful tool to combat terrorism, providing the ability to connect the dots and reveal the organizational pattern of something so sinister.

The events of 9/11 instantly changed perceptions of the wordsterrorist andn- work, especially in the United States.

The international community was confronted with the need to tackle a threat which was not con?ned to a discreet physical - cation.

This is a particular challenge to the standard instruments for projecting the legal authority of states and their power to uphold public safety.

As demonstrated by the events of the 9/11 attack, we know that terrorist attacks can happen anywhere.