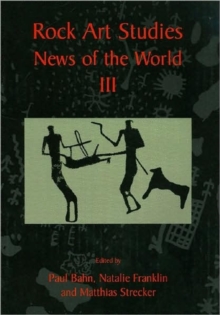 This is the third in the five-yearly series of surveys of what is happening in rock art studies around the world.

As always, the texts reflect something of the great differences in approach and emphasis that exist in different regions.

The volume presents examples from Europe, Asia, Africa, and the New World.

During the period in question, 1999 to 2004, there have been few major events, although in the field of Pleistocene art many new discoveries have been made, and a new country added to the select list of those with Ice Age cave art.

Some regions such as North Africa and the former USSR have seen a tremendous amount of activity, focusing not only on recording but also on chronology, and the conservation of sites.

With the global increase of tourism, the management of rock art sites that are accessible to the public is a theme of ever-growing importance.