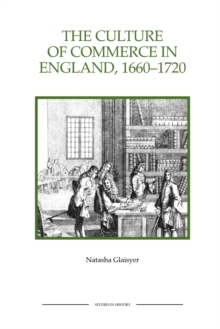 Late seventeenth- and early eighteenth-century England - the period between the Restoration and the South Sea Bubble - was dramatically transformed by the massive cost of fighting wars, and, significantly, a huge increase in the re-export trade.

This book seeks to ask how commerce was legitimated, promoted, fashioned, defined and understood in this period of spectacular commercial and financial "revolution".

It examines the packaging and portrayal of commerce, and of commercial knowledge, positioning itself between studies of merchant culture on the one hand and of the commercialisation of society on the other.

It focuses on four main areas: the Royal Exchange where the London trading community gathered; sermons preached before mercantile audiences; periodicals and newspapers concerned with trade; and commercial didactic literature. Dr NATASHA GLAISYER teaches in the Department of History at the University of York.