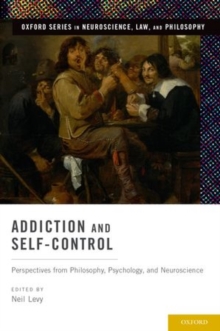 Addiction and Self-Control : Perspectives from Philosophy, Psychology, and Neuroscience Hardback

Part of the Oxford Series in Neuroscience, Law, and Philosophy series

This book brings together a set of papers, many which grow out of presentations at a conference in Oxford in 2009 on addiction and self-control, by a set of thinkers who are united in believing that understanding agency and failures of agency requires engagement with the best science.

The papers it collects attempts to illuminate the mechanisms involved in addiction and thereby to understand to what degree and in what ways actions driven by addiction are controlledby the agent, express his or her will or values, and the extent to which addicts are responsible for what they do.

Some of the papers focus on the neuropsychological mechanisms involved, especially on the role of the midbrain dopamine system.

Others focus on features of the behavior and the extent towhich we can infer psychological mechanisms from behavior.