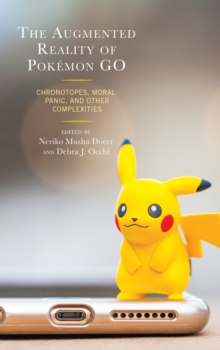 The Augmented Reality of Pokemon Go : Chronotopes, Moral Panic, and Other Complexities Hardback

What happens when a group of people see things that others do not and begin acting accordingly?

The Augmented Reality of Pokemon GO: Chronotopes, Moral Panic, and Other Complexities explores this question by examining what happened after Pokemon GO, a smartphone augmented reality game, was released in July, 2016.

The game overlaid the world of Pokemon onto the "real" physical world, drawing 30 million players in the first two weeks.

Pokemon GO has created new ways of sensing the environment, reading things around us, walking the street, and dwelling in certain areas, i.e., inhabiting the world.

Through detailed text analyses of the game and auto-ethnographies of the contributing authors' experiences playing the game analyzed from anthropological perspectives, this volume provides nuanced analyses of this new way of relating to the world: the augmented reality world of Pokemon GO.

Each chapter focuses on specific aspects of this new experience of the world: the cosmology of the world of Pokemon and the multifaceted ways we relate to our environment through Pokemon GO; the notion of space and time in Pokemon GO and its interface with that of real world as it guides our actions; the phenomenology of Pokemon GO in urban walking with its complex relationships to public space, "nature" as constructed through modernity, cell phone infrastructure, and urban landscapes where insects, animals, birds, human, history, transportation infrastructure, and trash all intermingle to create its ambiance; and the game's link to the wider social issue as it gets appropriated for "friendly authoritarian" goals of civil society, imposing various ideologies and accruing commercial gains.

Through "participant observation" -all contributors have been avid Pokemon GO players themselves-this volume offers snapshots of the Pokemon GO effect from its initial stage as a social phenomenon to Spring 2018.