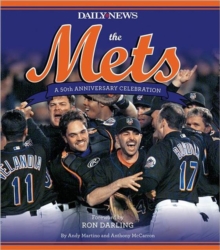 In honor of the upcoming 50th anniversary of the amazin' New York Mets, the New York Daily News has created the definitive commemorative tome for fans.

In 1962, the New York Mets stepped in to fill the void left by the exodus of the New York Giants and Brooklyn Dodgers.

The Mets were embarrassingly inept in their early years, but after two World Series titles (1969 and 1986), they proved their place in New York baseball history.

Along the way, the cast of characters has rarely failed to entertain.

This fascinating narrative includes more than 200 of the Daily News's greatest Mets images and a fantastic foreword by Ron Darling, making this a must-have book for fans everywhere.