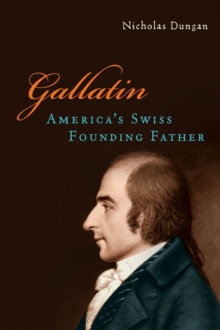 You won't find his portrait on our currency anymore and his signature isn't penned on the Constitution, but former statesman Albert Gallatin (1761-1849) contributed immeasurably to the formation of America.

Gallatin was the first president of the council of New York University and his name lives on at NYU's Gallatin School of Individualized Study, so it is with pride that New York University Press and the Swiss Confederation publish this new biography of Gallatin. Gallatin's story is the opposite of the classic American immigrant tale.

Born in Geneva, the product of an old and noble family and highly educated in the European tradition, Gallatin made contributions to America throughout his career that far outweighed any benefit he procured for himself.

He got his first taste of politics as a Pennsylvania state representative and went on to serve in the U.S.

Senate and House of Representatives. Gallatin became the Secretary of Treasury in Jefferson's administration and, despite being of the opposite political party to Alexander Hamilton, Gallatin fully respected his predecessor's fiscal politics.

Gallatin undertook a special diplomatic mission for President Madison, which ended the War of 1812 with the signing of the Treaty of Ghent and gave the United States its genuine independence.

Gallatin continued in diplomacy as minister to France and to Great Britain, where he skillfully combined his American experience and European background.

In the early 1830s, at the age of seventy, he retired from politics and commenced a new career in New York City as a banker, public figure, and intellectual.

He helped establish New York University and the American Ethnological Society, became an expert in Native American ethnology and linguistics, and served as president of the New-York Historical Society.

Gallatin died at age 88 and is buried in Trinity churchyard at Broadway and Wall Street. In our own day, as we look at reforming our financial system and seek to enhance America's global image, it is well worth resurrecting Albert Gallatin's timeless contributions to the United States, at home and abroad.