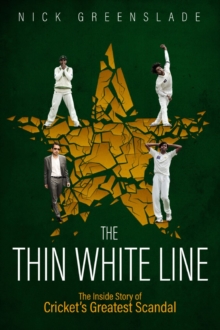 The Thin White Line : The Inside Story of Cricket's Greatest Fixing Scandal Hardback

The Thin White Line: The Inside Story of Cricket's Greatest Scandal tells the story of the spot-fixing scandal of 2010, which sent shockwaves through the sport.

It stunned the wider sporting world and confirmed the reputation of the News of the World's Mazher Mahmood as the most controversial news reporter of his generation.

It was the start of a stunning chain of events that saw the News of the World shut down, Pakistan captain Salman Butt and bowlers Mohammad Asif and Mohammad Amir banned and sent to prison, before Mahmood himself ended up behind bars.

This gripping, forensic account takes the reader through the twists and turns of those fateful days late one August and beyond.

For the first time, it shines a light on the tradecraft of the News of the World team and how they exposed the criminal scheming of the cricketers and their fixer Mazhar Majeed.

It reveals how deeply fixing had penetrated the Pakistan dressing room, and lifts the lid on the black arts of investigative reporting which would eventually prove Mahmood's undoing.