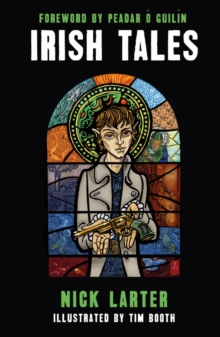 You've seen fairies before. Of course, you have. But not this. You've never seen anything like this. Peadar O Guilin (from his foreword) Nick Larter's Irish Tales is a collection of new fairy stories for adults. Its unifying theme is the decline of Faerie power in the face of the onward march of modernity. The stories tell of a King gradually losing control of his subjects and servants, and increasingly unable to influence the world of men. Within these pages there are tales of both our own, and alternate Irelands; stories of the Easter Rising and of the Troubles; an homage to Francis Stuart, a nod to Harry Clarke.

Here, the King makes a compact with a maverick entomologist; there, with a young Turkish civil engineer.

A former British Army captain starts a vicious feud; a young family is menaced by Faerie badgers; a pregnant teenager seeks help from a Faerie abortionist, and a retired paramilitary man bears witness to the beginning of the end of the world.