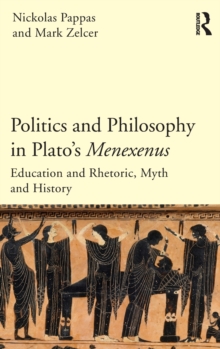 Menexenus is one of the least studied among Plato's works, mostly because of the puzzling nature of the text, which has led many scholars either to reject the dialogue as spurious or to consider it as a mocking parody of Athenian funeral rhetoric.

In this book, Pappas and Zelcer provide a persuasive alternative reading of the text, one that contributes in many ways to our understanding of Plato, and specifically to our understanding of his political thought. The book is organized into two parts. In the first part the authors offer a synopsis of the dialogue, address the setting and its background in terms of the Athenian funeral speech, and discuss the alternative readings of the dialogue, showing their weaknesses and strengths.

In the second part, the authors offer their positive interpretation of the dialogue, taking particular care to explain and ground their interpretive criteria and method, which considers Plato's text not simply as a de-contextualized collection of philosophical arguments but offers a theoretically reading of the text that situates it firmly within its historical context. The book will become a reference point in the debate about the Menexenus and Plato's political philosophy more generally and marks an important contribution to our understanding of ancient thought and classical Athenian society.