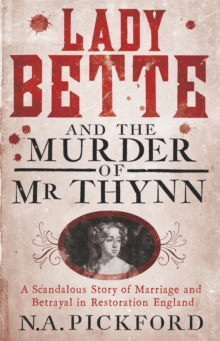 Lady Bette and the Murder of Mr Thynn : A Scandalous Story of Marriage and Betrayal in Restoration England Paperback / softback

The true story of a sensational marriage and murder in 17th-century London.

For fans of WEDLOCK, THE SUSPICIONS OF MR WHICHER and GEORGIANA: DUCHESS OF DEVONSHIRE. Lady Bette, the 14-year-old heiress to the vast Northumberland estates, becomes the victim of a plot by her grandmother, the Countess Howard, to marry her to the dissolute fortune-hunter Thomas Thynn, a man three times her age with an evil reputation.

Revolted by her new husband, Lady Bette flees to Holland.

Within weeks, Thynn is gunned down in the street by three hired assassins. Who is behind the contract killing? Is it the Swedish Count Coningsmark, young and glamorous with blond hair down to his waist? Or is it a political assassination as the anti-Catholic press maintains?

Thynn was, after all, a key player in the Protestant faction to exclude the Catholic James, Duke of York, as his brother Charles II's successor. Nigel Pickford creates a world of tension and insecurity, of constant plotting and counter-plotting and of rabid anti-Catholicism, where massive street demonstrations and public Papal burnings are weekly events.

The action moves from the great landed estates of Syon and Petworth to the cheap taverns and brothels of London, and finally to Newgate and the gallows - the sporting spectacle of the day.

In the process, the book gives us a vivid and deeply researched portrait of Restoration society. 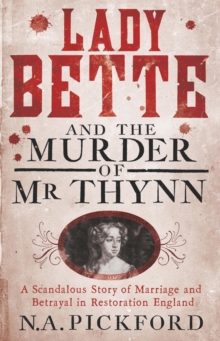 Lady Bette and the Murder of Mr Thynn