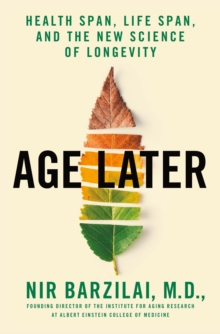 Nir Barzlai, M.D., founded the Institute for Aging Research at the Albert Einstein College of Medicine over twenty years ago.

His most fascinating study features a patient population of 600 centenarians - individuals who maintain active lives well into their 90s and 100s - and, more importantly, reached that milestone never having experienced the so-called big four: cardiovascular disease, cancer, diabetes and cognitive decline. Dr. Barzlai identified three clusters of genetic mutations - connected to levels of cholesterol, growth hormones and peptides produced in their cells' mitochondria - that correlate to centenarians' enviable lifespan and healthspan.

In Age Later, he translates those findings to news readers can use - including taking melatonin and using intermittent fasting - to mimic some of the effects of the 'super agers'' genetic code.