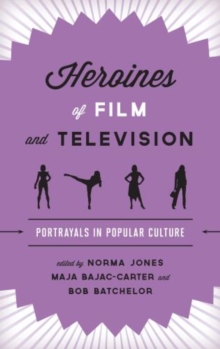 Heroines of Film and Television : Portrayals in Popular Culture Hardback

As portrayals of heroic women gain ground in film, television, and other media, their depictions are breaking free of females as versions of male heroes or simple stereotypes of acutely weak or overly strong women.

Although heroines continue to represent the traditional roles of mothers, goddesses, warriors, whores, witches, and priestesses, these women are no longer just damsels in distress or violent warriors. In Heroines of Film and Television: Portrayals in Popular Culture, award-winning authors from a variety of disciplines examine the changing roles of heroic women across time.

In this volume, editors Norma Jones, Maja Bajac-Carter, and Bob Batchelor have assembled a collection of essays that broaden our understanding of how heroines are portrayed across media, offering readers new ways to understand, perceive, and think about women.

Contributors bring fresh readings to popular films and television shows such as The Girl with the Dragon Tattoo, Kill Bill, Buffy the Vampire Slayer, Weeds, Mad Men, and Star Trek. The representations and interpretations of these heroines are important reflections of popular culture that simultaneously empower and constrain real life women.

A companion volume to Heroines of Comic Books and Literature, this collection will appeal to academics and broader audiences that are interested in women in popular culture.