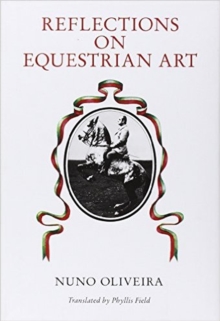 Reflections on the Equestrian Art Hardback

Nuno Oliveira began his riding career with maestro Jonquin Gonzales de Miranda, Master of the Horse to the King of Portugal.

In the 1940's he opened his own riding school and soon became an international name in the world of classical equitation.

In the 1950s and 1960s he gave exhibitions in Geneva, Brussels, Paris and London, followed by clinics in Saumur, Belgium, Holland, Italy, Australia and the USA.

His pupils include the most talented dressage riders, officers of the Cadre Noir, and riders of the Portuguese School.

First published in France in 1957, it was translated into English by Phyllis Field in 1976.

Times change but classical principles remain. Over 30 years may have passed, but this book remains one of the most relevant descriptions of Nuno Oliveira's work.