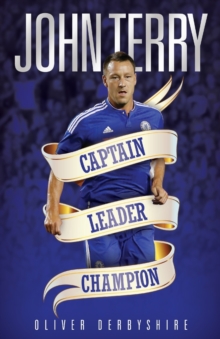 His imposing strength, natural skill and bulldog spirit have made him the backbone of both Chelsea and England's staunch defences. Born in London, and raised through the Chelsea youth teams, Terry's extraordinary talent soon had him replacing World Cup winner Frank Leboeuf to become a first team favourite amongst the Stamford Bridge faithful.

But Terry's progress has not all been plain sailing.

In 2002, when he was on the verge of realising his dream of playing for England after some outstanding displays in the under-21 team, he was involved in an incident outside a nightclub.

With his career in the balance, Terry battled back and, having been cleared of any charges, he became stronger than ever before. For years he was an indomitable force in the national side before retiring in 2012, having won 78 caps and appearing in two separate World Cups.

He was even presented with the ultimate English honour when, in 2010, he captained his country during their World Cup campaign. Truly though, Terry is Chelsea through and through.Handed the captain's armband under Jose Mourinho's inspirational regime, backed by Roman Abramovich's formidable buying power, Terry is proof that some qualities simply can't be bought. His immense leadership skills have earned him the respect of his fellow pros and fans alike.

With five FA Cups, four Premier Leagues - including an incredible 2014/15 campaign, and even a Champions League medal hanging in his trophy cabinet, John Terry must go down as one of the greatest Englishmen to ever play the game.