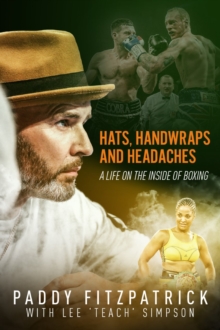 Hats, Handwraps and Headaches : A Life on the Inside of Boxing Hardback

Hats, Handwraps and Headaches is the inspiring, surprising and sometimes shocking story of Irish boxing coach Paddy Fitzpatrick, a failed pro boxer who was almost a Foreign Legionary before finding fame as a trainer of world-class fighters.

After struggling as a young adult and attempting suicide, Paddy's life was transformed by a chance meeting with Hall of Fame trainer Freddie Roach.

Back in England, Paddy used the things he had learnt to take George Groves to three world title fights, including the return super-fight with Carl Froch, which drew 80,000 fans to Wembley Stadium.

Filled with astonishing anecdotes - like the time Paddy took shots from a Heavyweight contender and a near-miss with a grizzly bear - Hats, Handwraps and Headaches is funny and poignant in equal measure, with riveting tales from both sides of the Atlantic.